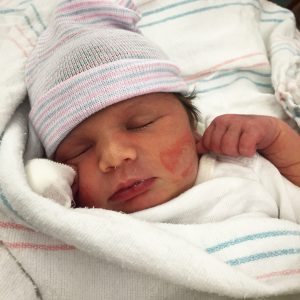 By all accounts, I had an incredibly lucky/fortunate birth experience with my twins. I’m grateful that it was a vaginal birth because that’s what made me feel safest. With both babies presenting breech, and the first coming out that way, I know that I had choices lots of birthing people don’t have because I had a doctor who was on board and lots of other people on board. Four months later, I think about that nearly every day and am grateful.

I do wish they’d come even half a week later, though. I had them at 35 weeks, 3 days. My minimum goal was 36 weeks. My ideal goal was 38. I hoped for no NICU time. I didn’t want mine to be among the half of twin pregnancies that go into labor before 36 weeks, a statistic.

But they came when they came. They went to the NICU for only 4 and 8 days. Their health was never really in question. We were assured often that it was just for monitoring, that the 5-day watch on Emerson for bradys was to be on the safe side but likely she’d be fine. She was fine. She waited in there for those last 5 days, and of course if she’d had another brady, maybe we would have felt like she needed to be there, but because she didn’t, it felt instead like they were keeping her hostage, being too conservative. Her NICU stay began with them saying she would likely only need to transition there for 6 hours. Every day, we thought she might come home until day 5.

I don’t know what I’m trying to get at exactly. Look. I saw the other babies there. One had been there like 6 months. Some babies were on feeding tubes and cpaps, and their parents weren’t supposed to touch them too much because they would get overstimulated. From the start, our girls were in open isolettes. Caroline’s cpap was more of a boost for her – she was breathing okay on her own – and it came off on day 2. Of course there were way worse situations going on with most of the other babies there, so it felt wrong to be too upset at the time, and it still feels wrong to feel too sad about it now.

When I left the hospital with their untouched baby bag, and the woman being wheeled out to the pickup line next to me had her baby

When it took over 6 hours after their birth to get a breast pump because it was the weekend and I had to split what little I got between the girls and I didn’t know you could use a dropper to get the drops of colostrum out instead of them mixing it in formula that the girls didn’t finish, and I didn’t realize I wasn’t going to see my babies for more than those 6 hours or be told I couldn’t hold Caroline and couldn’t breastfeed either of them

When I see photos of other moms, especially of twins, holding both their babies together, or I see their sweet babies swaddled together in one bassinet, in the hospital

I was/am hit with regret and sadness.

I know it could have been worse. I know that what has happened and will happen after their NICU stay matters more, shapes them more in the long run, than the hours I didn’t get to hold them, the formula I wish had been breastmilk, the strangers who touched them when I couldn’t, the baths I’d intended to postpone, the plans that changed. I know that. And I’m grateful that the NICU nurses took good care of them. I’m grateful even when I’m not convinced they should have stayed so long. I’m not a doctor or a nurse. I was just a mom who wanted to have her babies home.

I wanted a picture of my babies in my arms in my recovery room.

I wanted the double baby bassinet.

I wanted to dress them in the little coordinating sleepers that I literally had to have shipped three times because of order mix-ups.

These are small things to accept about the whole experience when I take in the bigger picture.

Sometimes, I want those first days back.